The Machinery Directive 2006/42/EC (MD) defines the prerequisites under which machinery and partly completed machinery may be made available on the market or put into operation for the first time in the European Economic Area (EEA). In principle, the MD is intended for the manufacturer. Due to the linking of (incomplete) machines with a superordinate control system to form a plant or due to modifications to machines or plants after they have been put into operation, operators frequently also become so-called “self-manufacturers” in practice. Depending on the case, the manufacturer or own manufacturer must affix the CE marking and draw up technical documentation, in particular the documents, for partly completed machinery or for machinery before it is made available on the market or put into service and, where appropriate, before it is put into service:

The Machinery Directive (MD) is also applicable to large industrial plants (e.g. those in the chemical industry). These installations can usually be divided into individual functional units related to production and safety, for each of which the requirements of the MRL must be complied with.

The weyer group advises and supports you in the implementation of the formal requirements of the MRL for your machine or plant.

EN ISO 13849-1 specifies the general control technology requirements of the EC Machinery Directive in the field of the machinery industry and provides safety requirements as well as a guideline for the principles of design and integration of safety-related parts of control systems. 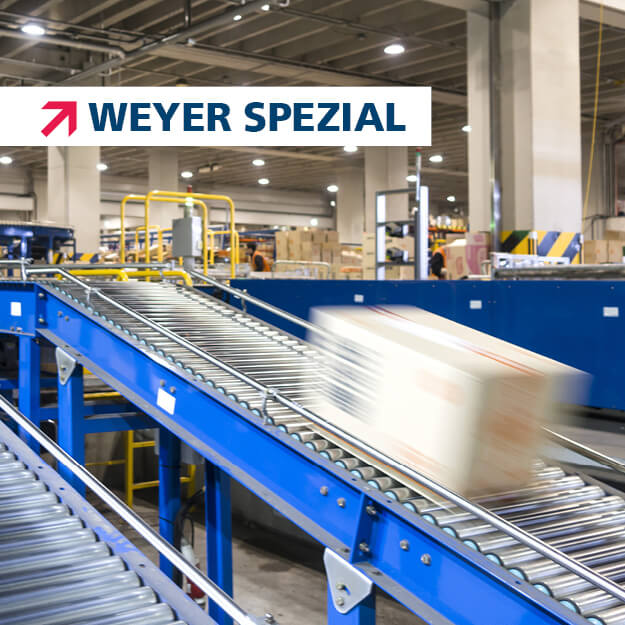 The Machinery Directive (MRL) describes uniform statutory health and safety requirements for the European Economic Area (EEA) that must be observed in the design and construction of machinery, partly completed machinery and products assimilated to machinery… DOWNLOAD WEYER SPECIAL 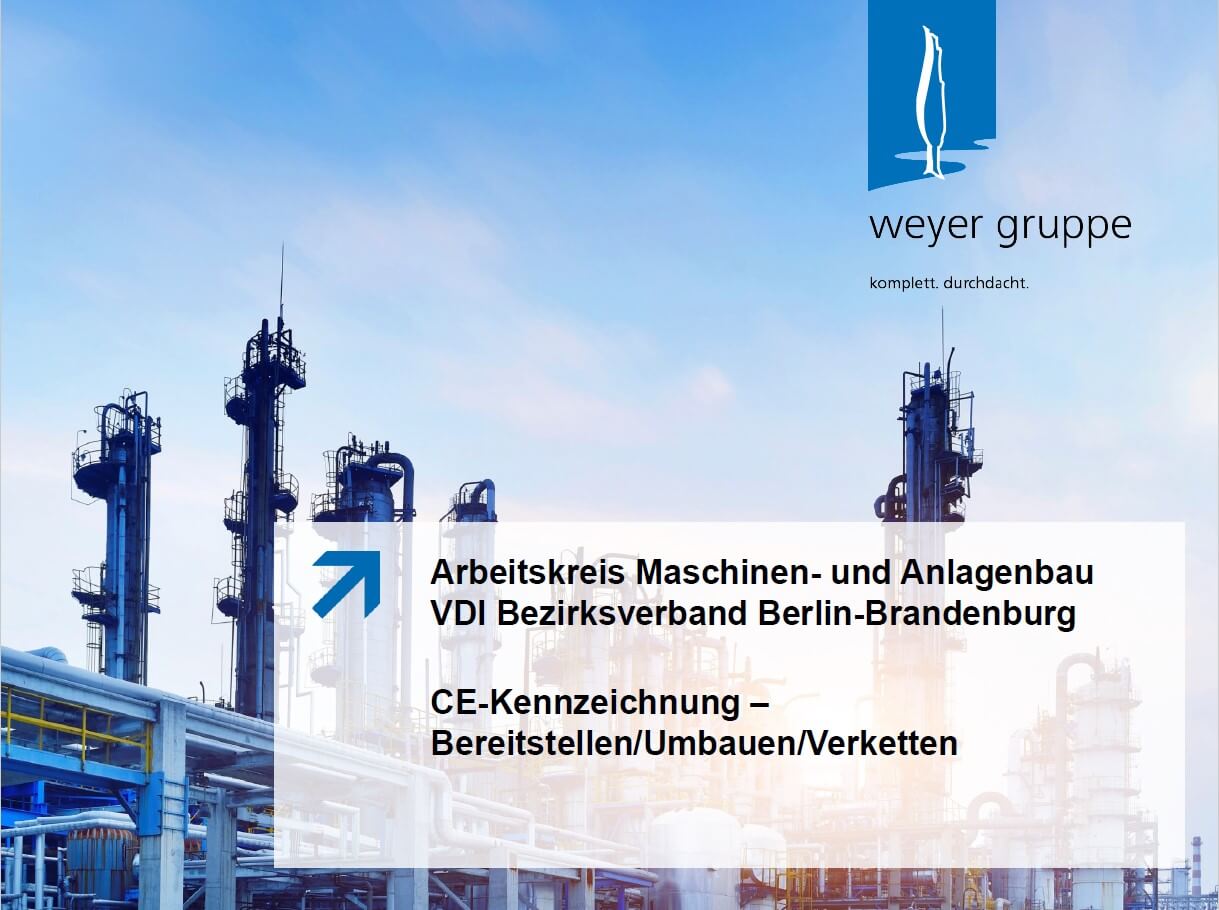 Where is the Machinery Directive 2006/42/EC (MRL) legally binding?

The MRL only applies within the European Economic Area (EEA). The EEA is made up of the 27 member states of the European Union and the EFTA states Iceland, Liechtenstein and Norway. On the basis of special agreements with the EU, the MRL is also applicable in Switzerland and Turkey.

Which products fall within the scope of the MRL?

The MRL regulates the following products (details in mouseover):

The same requirements apply to interchangeable equipment, safety components, lifting accessories, chains, ropes, belts and detachable PTO shafts as to machinery. These products are therefore referred to as products equivalent to machines.

Who must apply the MRL?

The MRL is basically addressed to the manufacturer who makes a product covered by the scope available on the market (places it on the market) for the first time in the EEA.

A special feature of the MRL is the equation of an operator with the manufacturer if the operator manufactures a machine for his own use and puts it into operation for the first time (operator = own manufacturer).

The requirements of the MRL must be fulfilled for the proprietary manufacturer by the time of commissioning. Commissioning is defined as the first intended useof a machine in the EEA.

What requirements must the manufacturer fulfil?

Before placing a machine on the market or putting it into service, the manufacturer or his own manufacturer must provide evidence that the provisions of the MRL have been complied with. The MRL prescribes certain procedures for this purpose.

In this procedure, the manufacturer or proprietary manufacturer must ensure and declare on his own responsibility that the machine meets all relevant legal requirements.

EC type-examination is the procedure whereby a notified body ascertains and certifies that a representative specimen of machinery referred to in Annex IV satisfies the provisions of the MRL.

As an alternative to the EC type-examination procedure, the conformity of machinery referred to in Annex IV shall be demonstrated by a full quality assurance system. The quality system shall be assessed, approved and monitored in operation by a notified body.

In particular, the following documents shall be prepared as part of the technical documentation:

Affixing the CE marking to an incomplete machine is prohibited!

Who monitors compliance with the MRL?

Infringements of compliance with the internal market regulations can be objected to or sanctioned by the market surveillance / market monitoring.

Does the MRL also apply to process plants?

In the case of large industrial plants, the production-related connection can often be affirmed, but usually not the safety-related connection. In this case, such installations as a whole are notsubject to the requirements of the MRL.

However, it is pointed out that most industrial installations can usually be divided into individual units of machinery in the sense of homogeneous functional units, for each of which the requirements of the MRL are to be applied.

How can a CE coordinator be meaningfully involved in the machinery procurement process?

An operator is planning a new agitator system for his own use, consisting of an agitator vessel (1), pump (2), power-operated fittings (3+4), piping, control system incl. MSR technology (5) and a storage vessel (6). The assemblies are procured from various suppliers and interlinked under the responsibility of the operator. 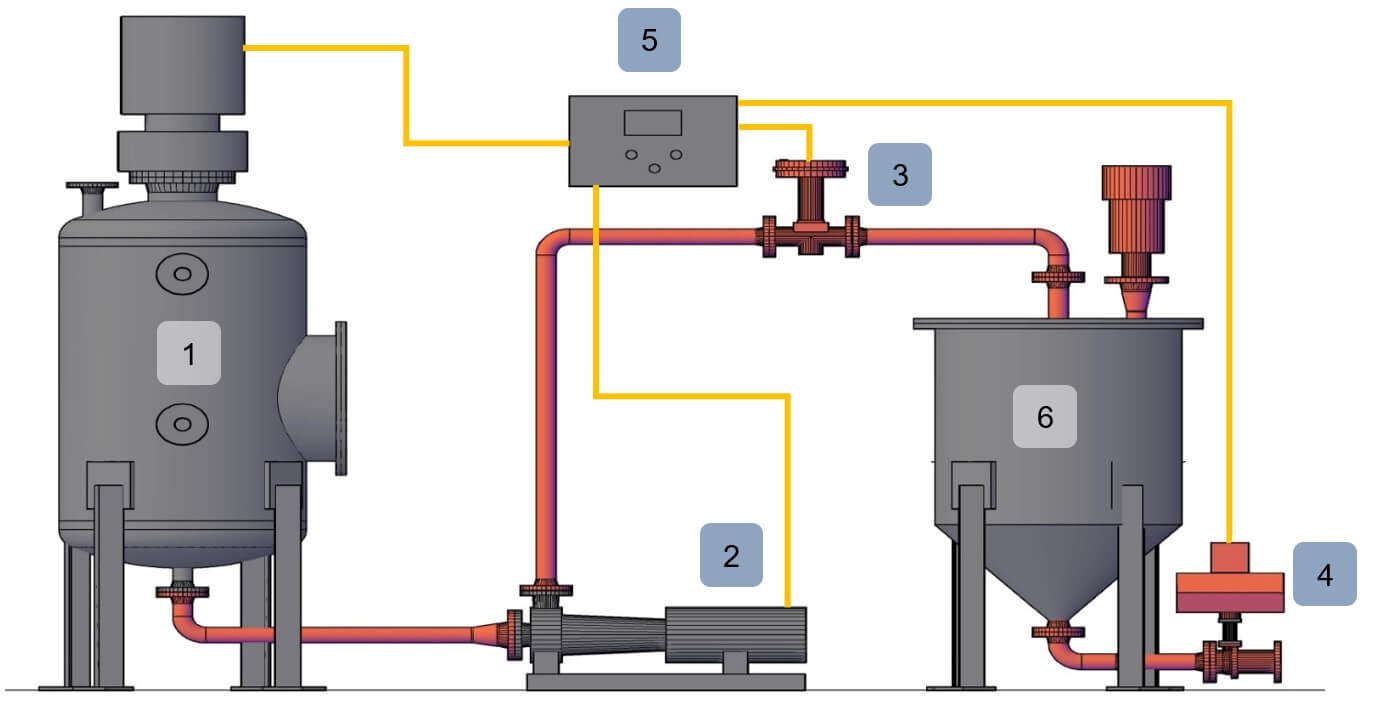 When planning the agitator system, other practical aspects must also be taken into account, e.g.:

Does a machine/plant have to be CE marked after a modification?

For the use of work equipment (e.g. machines/plants) by the operator, the Occupational Health and Safety Act and the Ordinance on Industrial Safety and Health (BetrSichV) based on it must be observed, among other things.

The BetrSichV stipulates that before modifying work equipment, the employer must assess whether the modifications require compliance with manufacturer’s obligations arising from other legal provisions, in particular the Product Safety Act (ProdSG).

The ProdSG covers the making available of products on the market, irrespective of whether they are new, used, repaired, reconditioned or even substantially modified. The ProdSG defines that a used product that is “substantially changed” from its original condition is to be considered a new product.

The assessment of whether a significant change within the meaning of the ProdSG is present must be examined on a case-by-case basis within the framework of a risk assessment, taking into account the interpretation in the interpretation paper of the Federal Ministry of Labour and Social Affairs with the flow chart mentioned below.

The modification of a machine/entirety of machines (e.g. by linking, replacement of components, increase in performance, intervention in the safety technology) can therefore, on the basis of the ProdSG, lead to the fact that, from a legal point of view, a “new” product is created from a machine or system already in operation due to a modification.

If the operator determines a “significant change” in the course of his risk assessment prior to the conversion, the conformity assessment procedure according to the MRL must be carried out by the operator as a proprietary manufacturer.

If the change in a set of machines only affects a part of the machine, it must be examined to what extent this has an effect on the whole (installation as a whole). If this change itself and its effects on the entirety are to be judged as substantial, a substantial change of the entirety of machines is present.

What is a Performance Level (PL)?

The PL is a characteristic value for the reliability with which safety-relevant parts of a control system fulfil a safety function – for personal protection. It is defined as the probability of a dangerous failure per hour (PFH). The PL is represented on a five-point scale from a to e, where e stands for the lowest probability of failure.

In the risk assessment according to MRL, the required performance level (PLr) must first be defined as a reliability requirement for each safety function that is to be implemented as a technical protective device in the machine control system for risk reduction, according to a risk graph or standard specifications.

The PLr refers to the control technology part of the protective device (functional chain) consists of the sensor system for detecting the dangerous state, a logic system for processing the signals and an actuator system for switching off the dangerous machine movement.

The specified PLr thus has an impact on the quality of components used in the functional chain and on the design of the circuitry in terms of susceptibility to one or more faults.

In the next step, the reliability of the respective safety function must be evaluated and mathematically proven, taking into account the device- and component-specific characteristics used. Proof is provided by determining the category, the probability of a dangerous failure per hour and determining the diagnostic coverage.

For the verification, the component suppliers either directly provide the data on the probability of failure and/or the PL of their subsystems or provide information on the number of operations until a dangerous failure occurs. For proven components without supplier details, default values from standard tables can be used.

The last step is to verify whether the PL achieved is greater than or equal to the required PLr.